The Nuclear Advanced Manufacturing Research Centre and US-based reactor developer NuScale have signed a new agreement to work together on the development of a groundbreaking small modular reactor. 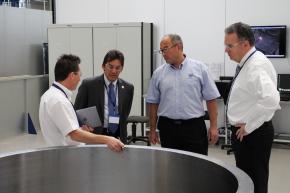 NuScale’s Power Module is a 50MWe pressurised water reactor and generator, designed to be deployed in clusters of up to 12 per site. The combined containment vessel and reactor system measures around 25 metres in length by five metres diameter, small enough to be transported by a single lorry, and features state-of-the-art passive safety systems which significantly reduce risks associated with current reactor designs.

The new agreement signed by Dr Reyes and Nuclear AMRC chief executive Mike Tynan opens the way for potential collaboration on the development and manufacture of the NuScale technology. During their tour of the Nuclear AMRC’s research factory, the NuScale team found out about the centre’s research and capabilities in areas such as electron beam welding, diode laser cladding and very large high-precision machining. 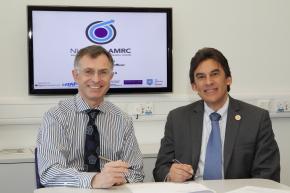 Mike Tynan said: “The work underway here at the Nuclear AMRC is founded upon the strong relationships we have with universities, UK industry, UK government and nuclear technology developers around the world. Our discussions with NuScale Power are part of our continuing support to the diverse technology base for civil nuclear power in the UK and we look forward to the potential development of SMR technology for the UK.”

NuScale’s visit to the Nuclear AMRC was part of a week-long programme of engagements with key UK nuclear engineering facilities.

Dr Jose Reyes said: “Given the UK’s engineering and skills base, working with British organisations is vitally important for NuScale as we move towards our first commercial power station. This week is about developing the basis for future commercial collaboration between NuScale Power and key British nuclear engineering players. It’s also about ensuring that tomorrow’s nuclear engineers, whether in Sheffield or Oregon, get the training opportunities they need to help build the advanced, clean energy technologies of the future.” 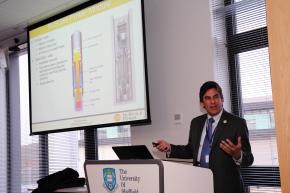 During his visit, Dr Reyes led a seminar on the NuScale design for an audience of local manufacturers and engineers at the AMRC Knowledge Transfer Centre .

Dr Reyes also announced details of the new internship programme with the University of Sheffield, which will allow up to five Sheffield students to spend a summer at the company’s operational facilities in Corvallis, Oregon, and at Oregon State University. The programme will begin in summer 2015.

The Nuclear AMRC has also signed a new agreement with engineering consultancy Atkins on nuclear industry R&D and supply chain support, which will potentially include collaboration on SMR development projects.